“Keeping ahead of the herd” seems an appropriate motto for a company involved in the dairy industry. But the herd is not just friesians or jerseys. What AgFirst Engineering director Davieth Verheij has in mind are other agricultural engineering companies, farmers, town water suppliers, and horticulturalists. 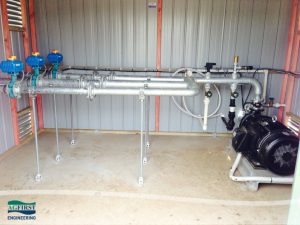 AgFirst Engineering is a part of the AgFirst NZ Group, a wide ranging company working across New Zealand and Australia.

It developed in the 1990s when some Ministry of Agriculture staff, unhappy with the changes taking place in their organisation, withdrew and started AgFirst in the regions they were working in.

“We are involved in everything to do with water and waste water in farming systems from design and consultation right through to product supply, project management and construction.”

It is a lean machine. Verheij’s Te Awamutu branch has a staff of six.

Their major recent project has been the Landcorp Farming-managed Wairakei Estate in Reporoa. Formerly forestry-farmed land, this development has seen nearly 10,000 hectares become 13 dairy and dairy-support farms, with another 3500ha developed for dry stock.

AgFirst designed, supplied and built the stock- water supply and reticulation systems, and the effluent disposal plant for 11 of the farms.

Of course, the six Te Awamutu staff cannot do all such work themselves. They have developed relationships with contractors with the equipment and skilled staff to do the physical work. AgFirst source or construct the technical equipment in house and oversees the whole project.

“We keep our team small, sharp and knowledgeable,” says Davieth. “We manufacture and install the pumping and pond-stirring equipment, and have companies keen to work with us doing contract work such as lining, earthworks and electrics.”

AgFirst staff have attended three of the largest European agricultural exhibitions during the last two years, and made farm visits in Europe.

“These exposed us to world-leading companies and technologies, and have led to strong business relationships, with cutting-edge technology introduced to New Zealand.”

Davieth Verheij believes regulations now required of farmers mean the old idea of buying a pump and pipes and installing a reticulation or effluent system, or getting a local engineer to do the job, just doesn’t cut it any more.

It may work for a few years, but can run out of steam, or will not measure up to environmental standards and have to be replaced. It is more economical in the long run to use a company with expertise, knowledge and international contacts to do it right in the first place.

This does not mean local rural companies disappear. AgFirst is expanding its business by providing the planning, plant and oversight for local companies to do on-farm work. This gives AgFirst access to farmers the company might not otherwise have known about, and maintains the rural infrastructure that has worked with the farmers for years.

Two examples of recent systems innovations are the Weta travelling rain-gun, and the Rota 2000 solids-separation system.

The Weta, developed by AgFirst, ensures a farmer complies with dairy effluent regulations. The key design consideration was achieving consistent application depths throughout the effluent area and ensuring fail-safe spread of nutrients. Effluent travelling through the gun via a turbine and hydraulic motor and pump propels the machine. A solar powered by-pass valve selects travel speed. A motion sensor controls the valve so that, if speed is reduced by extra drag, for instance, the valve will alter the application rate and depth. If the irrigator stops, including reaching the end of its run, the motion sensor shuts off the valve, eliminating over application. A pressure-flow sensor at the pump turns it off automatically, eliminating telemetry between irrigator and pump.

“The Weta achieves flows up to 40,000 litres per hour,” Davieth Verheij says. “Application depths range from 1mm to 20mm, and wetted widths from 20m to 80m.

“The Rota 2000 solids separation system has completely changed the game when it comes to solids removal in dairy effluent systems,” he says.

New Zealand has a range of solids separation systems available, but he reckons the Rota is the first on the market to successfully achieve the trade-off between low maintenance, processing capacity and coping with high solids loadings.

It can process up to 80,000 litres per hour, important in high rainfall and large catchment areas such as feed storage and feedpads or barns.

Not all alternatives can keep up with large storm- flow events, needing very large and costly primary storage structures and elevated risk of discharge of raw effluent into waterways.

“The Rota can achieve this with only 1.1kW, up to five times less power than other solids separators with even less processing capability.”

Because it self-regulating, if the effluent is very thick, the Rota allows it to flow back to the primary sump, removing the risk of overflow into the solids bunker. The processing volume can be maximised, as the pump flow rate can be set during a storm event when the liquid is thinner and needs to be pumped out faster.

AgFirst Engineering is moving into retail and distribution. With its research and development skills, design and project management skills, and the overseas contacts, it is in a strong position to cost-effectively assist other companies provide services in rural areas.

“We build complete kitset systems for our partners around New Zealand,” Davieth says. “They have the peace of mind that the systems are well designed and are going to work for their clients.”